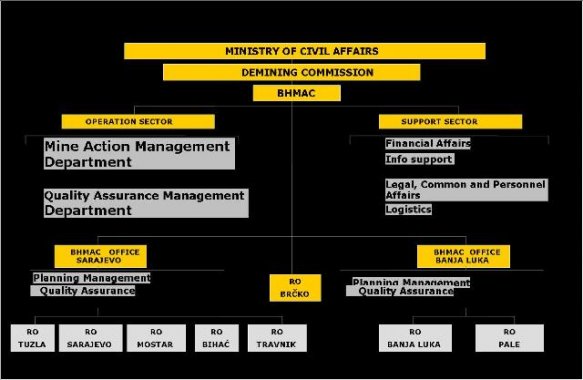 In order to improve the functionality of mine action structure, but also to ensure the quality, economy and efficiency in this field, new Demining Law was adopted in 2002, introducing the central structure of BHMAC at the state level, established within the B&H Ministry of Civil Affairs.

Supervision of the work of BHMAC is carried out by the Commission.

Office Sarajevo and Banja Luka perform the following tasks:
a) mine risk education, marking, mine clearance and mine removal operations (in accordance to technical standards approved by the Commission and using existing civilian expertise within entity governments);
b) provide data for the central minefield database;
c) coordinate demining operations with other mine action organizations, assuring that all activities are operated in accordance to the approved priorities and approved standards;
d) prepare priority proposals for demining operations and issue tasks;  perform inspection, and after task is finalized, performs an analysis of quality control and proposes issuing certificates on the quality control of the cleared areas;
e) propose a list of priority tasks to the entity government;
f) preparing work plans, budgets, reports and budget to be presented for to entity governments, BHMAC central office, the Commission and the Donors Committee;
g) perform other tasks in accordance with the founding act.

Downloads
Download app of Mine Suspected Areas in Bosnia and Herzegovina